I don’t remember until

I see them return

Over and over again.

Twenty-three years of being

Without family and friends

In place of hope.

I don’t know what

Tomorrow leaves for me

But somehow I find a way

To maintain my humanity,

My humility, and my

They can’t take these three things

Regardless of their attempts

Keep them safe and close,

What may come as a surprise to some readers is that many incarcerated individuals feel strongly about wanting to make amends for their past wrongs or give back in some positive way. I’ve heard over and over again “You don’t know how much it means to us to be able to give something positive to the world.” Unfortunately, with life long sentences, that is not always an easily attainable goal. However, the Frontline documentary “The Interrupters” shows not only the goodness that can be done by formerly incarcerated individuals, but also an effective tactic for preventing violence and confronting it at its roots rather than simply seeking punishment in the aftermath. The ‘violence interrupters’ that are shown attempt to address the learned behaviors and societal issues that lead to interpersonal violence and show that it is possible for communities, separate from the legal system, to decrease violence and mediate conflicts. It is an interesting and thought-provoking message that I would like to share. My questions for others who view this film are: Can you imagine using these kinds of mediation methods in your own community? Can you think of other issues which could be addressed directly to reduce violence or other harm? Can you think of other ways the formerly incarcerated, or currently incarcerated, could be positive forces in their communities? Without a doubt there are other great examples of harm reduction work and formerly(&currently) incarcerated people giving back in positive ways. I think these questions are important in order to imagine how changes in the way we view and treat prisoners could improve our communities and to see how changing our tactics around harmful behavior could improve society as well. Want to discuss these ideas? We welcome comments and messages!

Watch the documentary “The Interrupters” at the link below:

Also, another great way to make a positive change in the world is writing to inmates. If you would like to know about getting a pen pal, please contact us. We have many addresses of prisoners waiting for someone to drop them a line!

Lastly, our Zines and Crafts page has been updated to accurately show our current publications and bracelets available. Please be in touch to order!

A cup of God’s Presence

one scoop of genuine Love,

Sprinkle with the sweetness

in swirls of Loyalty,

and splash in a dash

Then stir in a smidgen

Combine that with an honest dose

a drop of compatibility.

shake well, and serve with a smile

to the right man or woman for you.

A poem/daily dose of inspiration by Mpaka, a Texas Death Row inmate.

This short documentary film is most definitely worth 50 minutes of your time. Even the first 10 or 15 minutes gives you some profound knowledge and thoughts, and there are numerous spoken word and musical interludes from Brooklyn artists that are great too. This film is based on the writing of a Texas prisoner, who is still currently incarcerated despite having been ordered released several years ago, and Dr. Betty Gilmore who has written about the psychological effects of imprisonment. Nanon was put on Death Row as a juvenile and has since been moved off due to the court ruling against executing juveniles. He is incredibly intelligent, author of numerous books, and has worked on a prison newsletter for many years. Several people in Houston plan on getting together to read their book in the near future. Please watch and share:

The Darkest Hour Film (click to view) from GoodMedia Press on Vimeo.

“We live in the age of racialized mass incarceration. An age in which tens of thousands of human beings are caged in solitary confinement every day. Some for decades at a time. “The Darkest Hour” exposes the inhumane impact of extreme isolation experienced by those incarcerated nationwide.

Through intimate interviews with death row survivors like Nanon Williams, now serving life in general population, and the last words of men like Napoleon Beazley before execution by the state of Texas, these stories reveal the savage inner workings of our justice system.

“The Darkest Hour” is a call to action for a complete paradigm shift. We will either be ruled by passionate cries for punishment, or heal ourselves with the compassion required to repair a broken nation. ”

Want to read and discuss with us?

and contact us to let us know you want to join!

Angel for a friend, by T-baby 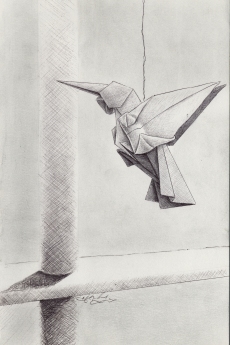